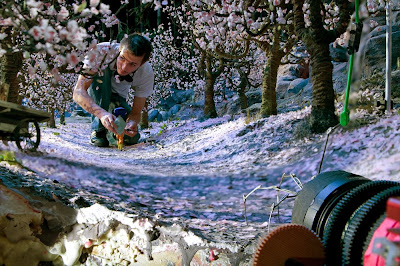 the story, while not equal to the visual and technical brilliance of the movie, is still pretty good and much better than I expected. a classmate asked me about the mouth movements on Coraline -- naturally I thought that they were simply replacement heads, like Selick's other films. essentially, I was correct. but he's upped the ante, according to Hollywood Jesus:

"Unlike most previous stop-motion features, Coraline added even more dimension to its puppet players by foregoing the use of replacement heads and using replacement faces instead. Based on scans and castings of the original puppets, the replacement faces were built by CG artists, printed out on 3-D printers, and then painted by hand. In addition, characters' faces were divided in two, with one set of replacements for the lower half and another set for the top half. As a result, where The Nightmare Before Christmas' Jack Skellington had only 150 possible facial expressions, Coraline has over 200,000 potential ones." 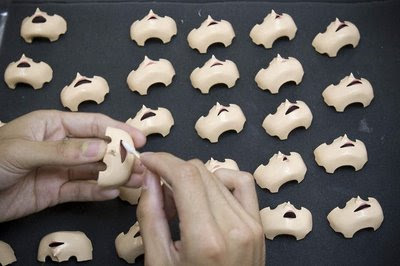 i guess they digitally removed most of those separation lines where the two parts of the head meet, but I remember seeing in some closeups the distinct lines marking their puppet nature -- and reminding us we're watching stop-motion instead of a computer animated film, which I think it could definitely be mistaken for. Selick pushed to have the lines stay in:

"I actually was pushing very hard to leave that line in; Most people, after five minutes, they wouldn't see it anymore. It disappeared. Initially, it's like, here's proof that this is handmade, kind of showing the technique in its lips; If you're going to do stop-motion, I'd like there to be the proof that it's stop-motion in the work," continues Selick. "Why not make it a little more obvious about what it is; I kept telling the animators, 'It's okay. It's these flaws that make it human, that make it unique.'" 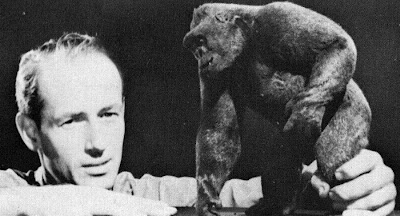 and here's an interesting if cursory article on the evolution of stop motion animation. its a fun breeze through many years of history -- pick your own film or movement that was left out, but its a nice introduction nonetheless.
Posted by Kevin Harman at 11:38 PM