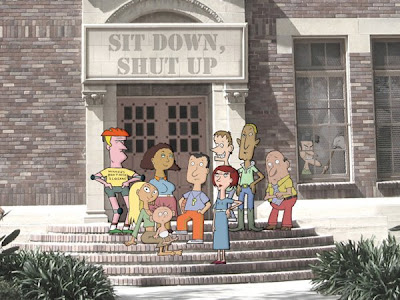 primetime animated shows that last longer than a season are exceedingly rare. especially if your name is not Matt Groening, Mike Judge, or Seth MacFarlane. coming this Spring to FOX, is an apology to Mitch Hurwitz for canceling Arrested Development! in the form of an animated series...that looks rather dull. of course, i'll reserve entire judgment till it premieres, but nothing grabs me from the promos other than the level of talent involved (Jason Bateman, Will Arnett, and Henry Winkler all play a part in the new series). its a remake of an Australian show of the same name from the early 00s. and FYI Fox, Sit Down, Shut Up is not the first animation to use real backgrounds with animated characters. see: Ralph Bakshi.

this all said, it could be very neat. let's hope for the best. its got to at least be better than the upcoming Cleveland Show. check out the promo to see if it might be your cup of tea. promising: Tom Kenny is part of the cast.