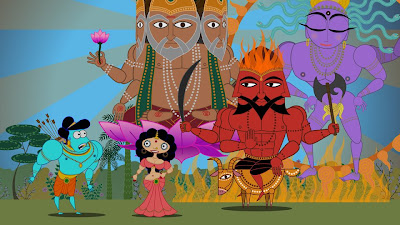 in case you've been living under an animated rock, Sita Sings the Blues is the 82-minute Flash animated feature by Nina Paley following both a goddess and an animator. its animated nearly entirely by Paley herself, independently too. she shares the synposis:

"Sita is a goddess separated from her beloved Lord and husband Rama. Nina is an animator whose husband moves to India, then dumps her by email. Three hilarious shadow puppets narrate both ancient tragedy and modern comedy in this beautifully animated interpretation of the Indian epic Ramayana. Set to the 1920's jazz vocals of Annette Hanshaw, Sita Sings the Blues earns its tagline as "The Greatest Break-Up Story Ever Told."

the part about the jazz vocals is why you haven't seen it in theaters yet. copyright issues have plagued this incredibly critically acclaimed piece of animation. apparently, this is the technical breakdown, "the musical composition itself, including aspects such as the lyrics to the songs, the musical notation, and products derived from using those things, is still under copyright." but you too can see it soon! first, the trailer:

the production design is simply beautiful. anyway, back to the seeing the 2008 winner of the Best Feature at Annecy in its entirety. first, for you New Yorkers, its airing on PBS (WNET) on March 7th. for the rest of y'all, she is currently in the process of getting the film streamed for free off of web servers. WNET will stream a compressed version of the film on their website starting February 26th, but if you're looking for a permanent home for the film -- she is too. she's negotiating with the copyright holders to give away her film for free. you can also make a donation on her website and get a copy on DVD right quick! its all in your hands now. 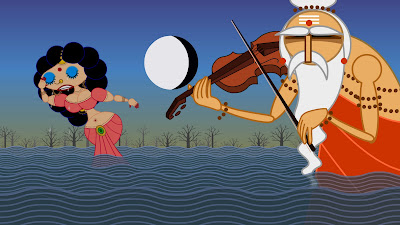 check out her interview at Film & Video to learn more about Sita.
Posted by Kevin Harman at 7:46 PM