I haven't found Miss Right yet, but when I do, the whole world will hear us singing! 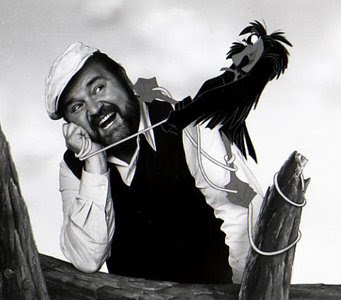 one of the most likeable and enthusiastic voice-over actors in a long time has passed. Dom Deluise died yesterday at the age of 75. his love for voice-over started with a handful of Don Bluth productions including the roles of Jeremy the crow in The Secret of NIMH, Tiger in An American Tail and its sequel (not done by Bluth) An American Tail: Fievel Goes West, Itchy in All Dogs Go to Heaven, and the lead in the little-known A Troll in Central Park. in his later life, he worked almost exclusively in voice-over in guest spots for various shows like Duck Dodgers and Dexter's Laboratory. in all the sequels and rehashes of An American Tail and Secret of NIMH, he kept continuity by voicing them through what I would imagine would be less than satisfactory material compared to the originals. check out one of the original trailers of The Secret of NIMH:

changing gears completely, Cartoon Brew featured a rather unanimated short by Michael Nason yesterday involving Confederate Fruit singing "Dixieland." While it lacks for nothing in concept, the execution left a lot to be desired for me. checking out some of his other videos, however, has led me to the realization that this guy may be a complete and utter genius.

perhaps even more engaging is his attempt at "narrative" I suppose in the adventures of "Catman." its populated by many more gifs and limited animation cycles, but its a total film experience...if a very experimental one.

CatMan from Michael Nason on Vimeo.