don't mind if i do


Leerone - Care For Some Whiskey [Official Music Video] from Hank Friedmann on Vimeo.

here's an ambitious, yet quaint stop-motion/live-action composite music video from animator Hank Friedmann. my favorite part is when she's dancing with the troll-like creature at the end, as if swinging while holding hands -- the background blurs and creates a seamless effect. according to Hank himself, he used Shake to composite everything and used the blue screen method to shoot Leerone and key everything out. very effective.

i caught the ASIFA screening of Tales of Despereaux last night with Sara at the DGA. not expecting too much, i think it was enjoyable -- if confused in both tone and protagonist focus -- who's story is it? the style, however, is very nice and has a great storybook quality to it. its much better than the usual animated fare from studios other than Disney/Pixar or Dreamworks. the story behind the production, apparently, was not a happy one, as reported on Cartoon Brew a few months ago. the original director Sylvain Chomet (The Triplets of Belleville) was fired, but claims his designs were still used without proper credit.

to continue my reporting on video game animation as well, i present you The Secret of Monkey Island...in five minutes...in German.

ive seen plenty of movie recaps in flash in 30 seconds to 5 minutes, but this is a first -- the pretty faithful retelling of an adventure game. there's an english version, but its just not as fun. a while back there was a movie in the works based on the series, that Steve Purcell did some concept art for. 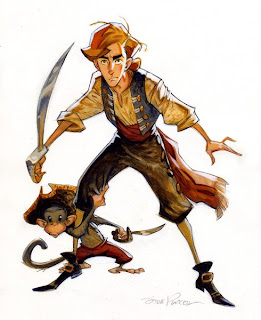