once again, here's an obscure Christmas cartoon that I first saw on a Christmas potpourri VHS as a young child. The Shanty Where Santy Claus is a lively, if second-rate cartoon again about an orphan and was part of the Merrie Melodies series when it was run by Hugh Harman (no relation) and Rudolph Ising. former original Disney animators (they were with him in Kansas before he moved to Hollywood), Harman and Ising were instrumental in the Alice Comedies and the Oswald the Rabbit cartoons for Disney. they broke off along with Charles Mintz when he broke off his deal with Disney and took Oswald along with him, where Harman and Ising continued their work with the character. when Universal kicked Mintz out and brought in Walter Lantz (who would later create Woody Woodpecker), Harman and Ising were out of work -- except for their signature AND copyrighted character, Bosko: 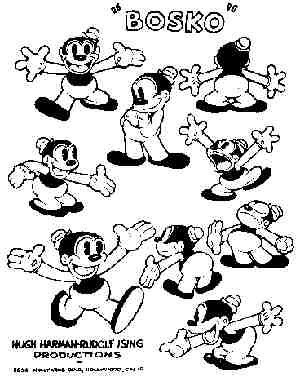 they shopped him around to all the studios in town until they finally found a friend in Leon Schlesinger who offered them a contract to produce a series of cartoons for Warner Brothers: Looney Tunes and Merrie Melodies. Looney Tunes ended up being for recurring characters (mainly starring Bosko) while Merrie Melodies turned into one-shots. this particular short is a Merrie Melody from 1933, right before they left the studio over budgetary disputes to go work for the Van Beuren cartoon studio.


its truly bizarre to watch today. there are also about a zillion cycles.
Posted by Kevin Harman at 2:29 PM