Gary Larson hasn't made much of a ripple since his retirement from The Far Side in 1995. beloved by millions, its still reprinted in thousands of papers around the world. his drawings seem like they would lend themselves to animation -- and it has, but you've probably never seen it. 1994's "Tales from the Far Side" was a short film collaboration between Larson and animation veteran and teacher Marv Newland (Bambi vs. Godzilla). after winning the Grand Prix at Annecy and airing on CBS for Halloween, it was rarely seen again.

that didn't stop Larson and Newland from working on a sequel, the aptly named "Tales from the Far Side II" in 1997.

eventually, they were only available on a limited run VHS which goes for quite a pretty penny on ebay -- you can now buy both on Larson's website for $30 altogether. its not the best price, but much better than it had been going for. from what i've seen of it, its looks interesting, if a mixed bag -- as any type of anthology film is bound to be. this is one of the funnier clips from the 2nd film:

and just for fun, one of the most successful and least animated animations of all time. the story goes that Marv Newland missed magic hour for his live-action short that was due for class, so he decided to do something quick -- an animation. and so began his illustrious career... 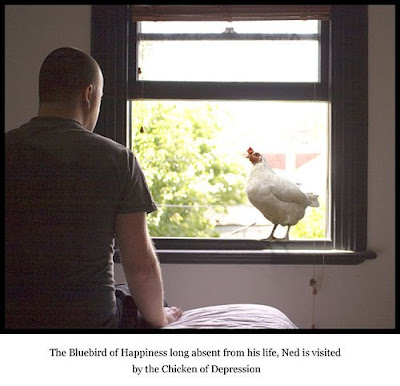 and if you just can't stand any more drawn/cartoony farsidedness, then check out this recent movement of live-action still renactments of Far Side cartoons.
Posted by Kevin Harman at 5:39 PM