Junktown was an early '60s comic drawn by a young Ralph Bakshi. this is one of my favorites: 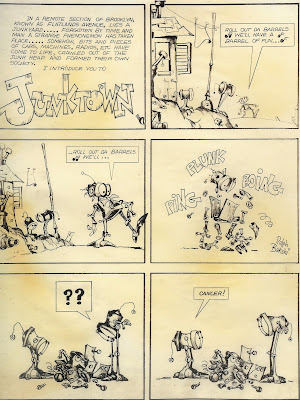 it was later made into a special for Nickelodeon called Christmas in Tattertown (the name changed from Junktown). originally, it was meant to be a pilot to a 39 episode series in 1989, but the idea was abandoned.

and just so you have a little something to watch, check out the trailer for his seminal classic (no, not Fritz the Cat) Heavy Traffic. i watched it for the first time last year and i'm starting to see why this Bakshi has such a reputation. its sort of an animated Mean Streets -- its dark, gritty, funny, offensive -- and everything else the trailer mentions. its also very free-flowing. i assume at least parts of it were animated straight ahead (instead of drawing the keys first). i remember reading that Bakshi didn't do many pencil tests for his films and saved not only money, but also some creativity that got lopped away with incessant checking. he's certainly the anti-Disney he set out to be, at least here in Heavy Traffic.