the uncanny valley of pumpkins

here's a still from the opening of my next stop motion film...if you can't tell, its halloween-themed. 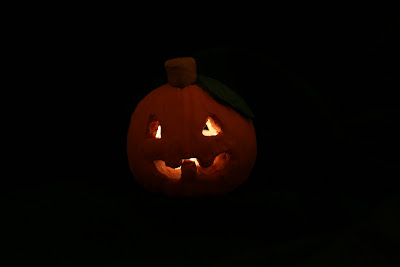 totally switching gears now, i'm looking forward to animators and designers overcoming the "uncanny valley," but they're just not there yet. as anyone who knows me, i've always been a more traditional kind of animator and story teller -- do it with your hands and tell it well, no matter the technology. of course, i don't mind well-told and well-animated stories in any medium -- Pixar tells amazing stories in CG and South Park (say what you will) is consistently telling engaging and hilarious stories, while being animated fairly simply and flatly. needless to say, i'm not a big fan of motion capture -- i'll be the first to congratulate them when they tell an engaging story, but something's missing and here's a good deal of the reason why: 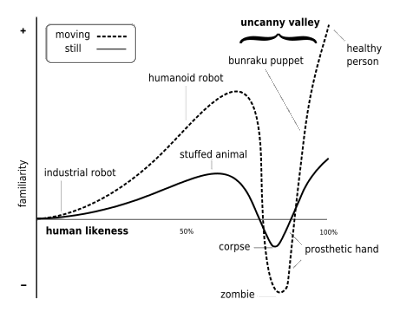 the idea behind the uncanny valley is tough (at least for me) to get your head around. its kind of the notion that the closer that something non-human gets to being human, there's a point that when its so close (but not quite there) it induces a very negative reaction in the viewer -- or at least a reaction where it takes one out of the illusion of the thing looking human. one can see this effect in the motion capture movies in the past few years like The Polar Express: 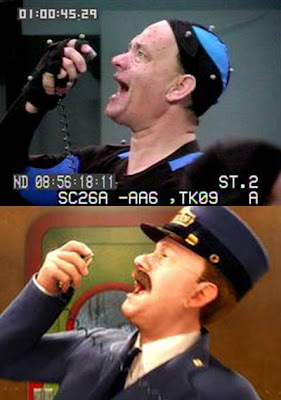 because we're so attuned to ourselves and other human beings -- we realize the slightest difference between us and an impostor. of course, we don't care when its stylized, like in most animated movies -- most of Disney's stuff for instance. they are not necessarily trying to recreate reality. with stuff like The Polar Express, Beowulf, and the upcoming A Christmas Carol (with Jim Carrey, god help us all), the imitation of reality tries so hard but misses some basic things. people often complain of the soulless eyes and emotionless marionettes that come from such motion capture. video games, in particular, try to recreate reality at an alarming rate and, i think, have less of a problem than feature animated films because people aren't necessarily there for reality recreated -- they'll settle for a lot less because of the interactivity. if people wanted reality in gaming, they'd have latched onto the Full-Motion-Video craze of the early 90s...

Ward Jenkins put it pretty succinctly back when Polar Express came out:

"when Hanks pulls his head up to belt into the mic, there's some straining going on in his neck area. This, again, is lost in the digital version. The way he thrusts his head up and out, with his shoulders going down, and the way his right arm is positioned all get mussed up, and become stiff and weak. There must be something in the way that the characters are created, or "modeled", that no matter how much the digital artists tried to tweak to get the body just right, the CG model would still win. All the characters I've seen in FINAL FANTASY and THE POLAR EXPRESS have a puppet-like, marionette-style of construction. The shoulders, the way they walk, the way the head is held in turns, etc. - even when you are capturing real live action for the performances - all have a stiffness to them that apparently cannot be tamed." 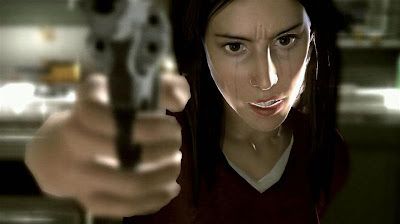 David Cage, behind one of the best games I've played in the 00's Indigo Prophecy (despite a disappointing third act), likes to motion capture his performers and treat his games likes movies. they're exceedingly engaging and keep you feeling like you're in the story. you have to interact with your environment constantly, especially during action sequences where you have to make split second moves to get out of the way. he's been working on his latest million dollar venture, "Heavy Rain," for a few years now and it looks very interesting. they've put a lot of work into making the characters look and act real -- but they've got a long way to go before that happens. its still in the creepy realm of the uncanny valley. this is a demo for the PS3 game that played at E3 in May of 2006 (a much higher quality quicktime version of the video here):

here's a more updated video of the game from last year that stands as the trailer for the (hopefully) soon-to-be-released game.