Say It Ain't So Unca Scrooge

so we all know the economy is in the tank. but you know its really bad when Scrooge McDuck applies to TARP for a bailout: 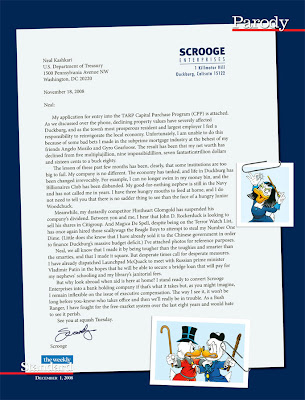 perhaps he forgot the lessons that he taught his young nephews in the 1967 short "Scrooge McDuck and Money." its a lively info-toon that Disney liked to produce in the 50s and 60s and is Scrooge's first major appearance in animated form. he was originally created, of course, in the comic book format for Disney by the legendary Carl Barks in 1947. here, McDuck is beautifully animated by one of the Nine Old Men from Disney -- Ward Kimball.


in this incarnation, Scrooge is voiced by Bill Thompson, probably best known as the original voice of Droopy, as well as various Disney characters in The AristoCats, Sleeping Beauty, Smee in Peter Pan, the White Rabbit in Alice in Wonderland, and Jock in Lady and the Tramp. this is notable because the role of Scrooge McDuck has been indelibly linked with that of Alan Young, the human star of Mr. Ed. this is the only appearance of Scrooge (except one cameo in the Mickey Mouse Club) where McDuck is voiced by anyone other than Young, who would start with Mickey's Christmas Carol and go all the way through Ducktales and to present day.

the short itself reminds me of two things, both Disney: Donald Duck in Mathmagic Land(which you really have to see if you haven't been so lucky to have seen it) and Mary Poppins.

this is no surprise, then, to find out that the director of the short, Hamilton Luske, directed both the animation for Mary Poppins and the entirety of Donald Duck in Mathmagic Land. Mathmagic Land and Scrooge McDuck and Money are both educational in tone, but share a very similar abstract animation quality about them, though Money has a more memorable song and dance number. Luske co-directed many Disney classics as well as directing perhaps one of the most famous and I think one of the best Mickey Mouse cartoons -- Mickey and the Beanstalk (part of the Fun and Fancy Free feature filled with shorts).

some guy on flickr decided to make a scale model of Scrooge's money bin: 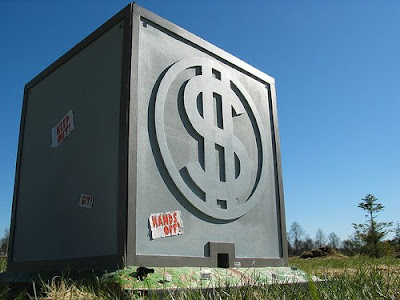 its incredibly detailed and done from blueprints from a Don Rosa comic (Carl Barks' successor on the Scrooge comics).
Posted by Kevin Harman at 5:11 PM