you have a great effects animation on me

often times, the general public and even us animators don't realize how much effort goes into animation that seems almost trivial to a scene -- effects animation. when its done great, you hardly notice it. when its poorly done, it sticks out like a sore thumb. Kathleen Quaife has done traditional effects work since the early 80s for all the major studios including Disney -- and she teaches life drawing to boot.

here's a cycle on twos for fire she worked on: 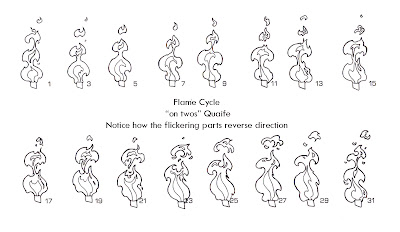 she (along with seven other animators) worked on this car commercial for Sprint:


most of her work is not available on youtube persay -- because no one thinks to put up just feature effects work in clips for those who peruse the digital boobtube. but on her blog, she has gaggles of her effects work available to view including some really beautiful stuff from The Pagemaster, The Chipmunk Adventure, Once Upon a Forest, and even a commercial she did some effects for Will Vinton -- Michael Jackson as a California Raisin of course. be sure to check out all the wonderful clips she has on her blog including her simply dazzling reel of effects animation.
Posted by Kevin Harman at 6:17 PM