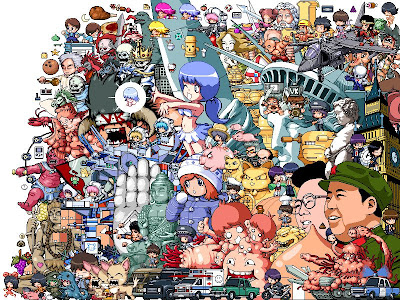 Paul Robertson has mastered 2-D 16-bit side scroller animation. its his chosen art form. he's become an internet sensation over the past few years, in large part due to his first major release -- Pirate Baby's Cabana Street Fight 2006. i remember seeing this at Spike and Mike's a while back and it got the most rousing audience response by far.

he's a 2-D video game animator by day for Game Boy Advance and DS games like Contra 4, Barbie and the Magic of the Pegasus, and SpongeBob SquarePants: Creature From the Krusty Krab. though he's not too proud of the work he's done in the industry,
"It's always just been a job to me as I've usually just worked on projects I didn't care about," its been the main source of his income and has fueled some incredibly detailed and well done shorts like no other.

because of the shorts he's done, he's gotten offers for music videos and commercials in the same style. this particularly kinetic one works pretty darn well for Architecture in Helsinki's Do the Whirlwind off 2005's In Case We Die:

Architecture In Helsinki - do the w... -
Uploaded by zectarien

this next music video for "Devil Eyes" by Qua is probably my favorite and most affecting animation by Robertson. its about a simple friendship between a cat and a panda until a visitor from outer space comes to play.

here's a commerical for Syke, an energy drink for gamers. its got parodies up the yin yang, see if you can spot all the references: 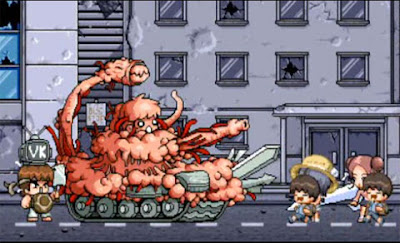 finally, if you have the time for his latest 12-minute epic -- 2008's Kings of Power 4Billion% -- its quite a ride. its essentially a tricked out run through of a game that never existed. if you loved 16-bit sidescrollers that made no sense, then this is your holy grail...

and if you can't get enough of the 29-year Australian animator, be sure to check out his awesome blog where he posts his art and animation-related materials often as well as his myspace, where he has plenty of animated gifs to keep you busy.
Posted by Kevin Harman at 2:12 PM